There was a screening of Jennifer Brea’s harrowing film Unrest yesterday in a local hotel and, after twelve months or so of largely 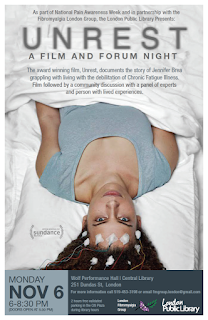 staying away from thinking and talking about M.E., I decided to go along.

The film was organized by the Irish ME/CFS Association and introduced by a young woman who herself has M.E. and who, I later found out, had done interviews on local radio and newspapers. The radio interview is here; she is poised and impressive and an excellent spokesperson for M.E. sufferers.

People may not have heard of Jennifer Brea, but her story is a familiar one for anyone with CFS/ME; she was a healthy, active individual when she contracted a virus that left her quite ill. Essentially she never recovered after this virus; a story that many millions of people can identify with. She is married but quite badly disabled and, in frustration at the limits on her life and the inaction of the medical community, she decided to make a film about her experience.

That film is called Unrest. The most impactful element of this film is that Jennifer insisted on being filmed at her worst, when she was exhausted, unable to move, depressed, semi-suicidal, intolerant of light and noise, unreasonable and frantic. It is this human element that brings home the massive impact that the condition has on her life, and on all sufferers lives.

Another key element in the movie is her relationship with her husband. At my worst, I was cared for by my parents and siblings, but luckily I was rarely bad enough that I couldn’t do the simple everyday things of preparing food, showering and dressing that are a struggle for so many.

Even still, I felt guilty about the impact that my illness was having on their lives, in terms of worry and also in the practical things that they had to do just to keep me going. That is also something that is obvious in Jennifer’s worldview; she feels like she is holding her husband, Omar, back in his life, unable to give him children, dragging him down with her. 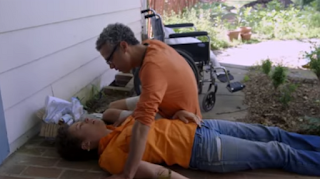 There is an affecting scene near the end of the film, where Jennifer expresses a lot of this to her husband. We have seen the effects that her illness has had on him, that he too is in stasis with his life on hold, acting as his wife’s carer and support system. He told her, apparently honestly – though I imagine he must have thought that it was all too much for him too at times – that it was still all worth it, just to have her in her life. Yet you could see the pain that this caused them both, the devastation ME/CFS has wreaked on their relationship and on their day to day lives.

I called the film “harrowing” above because for me it was a little traumatic watching it. I have made quite a decent recovery in the last five years and in the last year my life has opened up in ways that I never thought possible; I am now working full-time, I exercise regularly, cycle in to work most days, have published a book and have recently begun a relationship for the first time in years.

I am coming close to the end of the academic year and, as of this date, I have not missed a day – or even a class – to illness since March 2017. This small fact I consider, in my limited, stumbling existence, as one of my greatest achievements of the last ten years, seeing as I have a history of missing weeks at a time due to illness.

I am happy, active, interested in the future. This does not mean that I am 100% “recovered”; stress still affects me in disproportionate ways, I take a long time to recover from illness of any kind and I have to carefully manage my energy levels and activity. I still have periods of exhaustion, headaches, some nausea, food intolerances, sluggishness, a huge dependence on good sleep. In truth though, a lot of this is true for many “healthy” people, especially those in their mid-forties.

So I have made progress that, in my worst days, I didn’t imagine was possible. Yet those years, decades of ill-health are still with me; they profoundly effect the way I live my life now and they have made it so that I am ten or fifteen years behind my contemporaries in terms of family, children, relationships, career. And they have left a psychological legacy that I am still coming to terms with.

Watching Unrest just brought back memories of my past struggles and difficulties; things that I have been trying to block out for the last busy year. This is the reason that I haven’t posted a blog post in almost a year; I have been busy trying to put a life together, trying to move forward, loath to go back to that time in my life when I saw myself as someone without possibilities, someone left behind, one of the forgotten.

It was a terrifying, lonely, desolate place – and I wasn’t even someone who was severely affected, like Jennifer Brea – and, like any traumatic experience, I have been pushing it back to the dark recesses of my memory, not wanting to go back there. Unrest brought up stuff I have been trying not to think about.

It is an important film; important, not just for ME sufferers, who will see a lot of familiar themes in the story of Jennifer Brea and of the other PWMEs that she interviews, but for those who, until they watched it, did not know anything about the devastation that M.E. can have on a person’s life.

It has also reminded me about how lucky I am, even more than twenty years in, to have a life back, and how such a precious thing should not be taken for granted.


Posted by TheChronicSituation at 8:09 AM