IT HASN'T GONE AWAY, YOU KNOW

Between the 1970s and the 1990s there was a campaign of violence and conflict in Northern Ireland, begun by the IRA and carried on by Loyalist paramilitaries. It was called The Troubles. Thousands of people were killed and many more were injured and maimed in a low-level war fueled by historical divisions and hatred. By 1994 everyone, including the combatants, was exhausted, and the IRA declared a ceasefire. 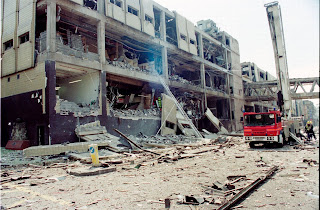 Then the negotiations began to attempt to reach a political settlement for Northern Ireland. The negotiations were long and fractious and protracted, and on many occasions people lost their temper and their patience. One of the main players in these negotiations was Gerry Adams, leader of Sinn Féin, the political wing of the Irish Republican movement that included the IRA.

In 1995 Adams was speaking at a rally in Belfast. Someone – one of his supporters in the crowd – shouted out a question about the IRA. He kind of smiled, looked out at the crowd and said, in his broad Beyl-fahst accent, “They haven’t gone away, you know”.
https://www.youtube.com/watch?v=AY3ddrc6WjE

These six words became famous, at least in Ireland. They have been used since then to talk about anything and everything that people thought had disappeared (“Recruitment firms: they haven’t gone away, you know”, from a headline in a newspaper in 2015).

Yet Adams’s original words had a deeper meaning. There was an obvious threat behind them, and an implication that, although the IRA were on ceasefire, and were not killing people at that very moment in 1995, it would take almost nothing for them to return to war. They were still there, still a threat, and although they had gone temporarily quiet, they could begin causing chaos again in no time.

I thought of these words – “they haven’t gone away, you know,” – recently. They seemed apt for my own current situation. I wrote recently about having published a novel, and about how proud and excited I was by this. I had done a lot of work to promote it, and had planned to launch the novel in Lisbon, where the book is set.

In my last blog post I wrote about how I had had to cancel a series of launches that I had planned in Portugal, as I had had been ill and exhausted with ME/CFS. I had organized and promoted three separate events in the space of a week, and had to cancel them all. It was tough to take, but the truth was that there was no way that I could have gone; I was just too drained and shaky.

I slowly recovered from the difficult period and rearranged some of the events for this week, as it is a mid-term break for me in work. I was due to fly over to Portugal on the Tuesday of this week.  I wrote in my last blog post, three weeks ago –

“It is going to be a scary three weeks until my flight; three weeks of avoiding anyone who is sniffling or coughing, three weeks of looking after myself, and trying not to overdo things, and to avoid getting sick. My job is to stay on the tightrope for just a little while longer, to stay well and finally make it over to Portugal, at the second time of asking.”

Of course, I didn’t manage it. I had a busy week, a few weeks ago, with work and other things, and by the time Friday came I realized that I was wrecked again, and that I had overdone it. This has happened before; if I don’t fully recover from a relapse and try to get back to normal activity too quickly, I can be back at work, even for a few weeks, and then crash again when I just push things a little too far. If there is any little bit of vulnerability left, unless I am careful, everything can fall apart very easily and I am back to square one.

So I was off work for a week, and then last week I went back on a limited basis. But my flight was on October 31st and again, there was no way I was recovered enough to be able to fly to Portugal and run a couple of book launches. For the second time in six weeks, I had left an empty seat on a Ryanair flight to Lisbon.

At least this time I didn’t have to cancel as many events, or with as many people. I hadn’t really started to promote the new dates yet – maybe I had sensed that something like this was going to happen – and so I only really had to contact the bookshops and the university where I had organized talks. It was almost three weeks in advance, so I wasn’t letting anyone down. Still, it was hard to take, especially a second time. And more so seeing as I can’t really see a time in the near future, even if I get back to normal, when I am going to have time off to go and launch this book.

It was something I desperately wanted to do, and – surprise, surprise – ME/CFS made it impossible. This is obviously not the first time that I have missed something important because of illness, but two in a row was hard to take. I may be used to it, but it doesn’t get any easier.

I had been acting for a while there as if my condition was not really an issue anymore for me. I have been working a lot, travelling, doing as much as I can to fill up my life, after having such an empty one for so many years. I have either forgotten, or chosen to ignore, the fact that I still have ME/CFS, that it is still an issue, that I am not a “healthy”, though I act as if I am. To paraphrase Gerry Adams, “it hasn’t gone away, you know.”

Far from it. It still dictates how I live my life, despite my increased activity levels. It means that I have organized my whole existence to allow me to live as fully as I can, without being overburdened with extra stress. I don’t have a relationship, and haven’t really tried to begin one, as I really don’t know how I would be able to fit one in, without having to work less or change my life around completely. ME/CFS means that I live in a cheap (though adequate) shared house rather than a place of my own, so my rent is affordable and I am not forced to try and work even more to pay for it. I live a necessarily limited life, within strict boundaries, just so I can have a little normality in other areas, like work, travel and social life. I have had to make choices; eliminate some things I may want so I can have other things.

The thing is, part of what I do when I am out in the healthy world, interacting with people who don’t have to carefully manage their limited energy levels, is pretend that I am like them. I will talk about the condition if someone asks, but it rarely comes up, and most people I know don’t really know about the struggles I go through daily. They just see the professional me, or the me who shops, or the one who turns up to social occasions. And I don’t advertise the huge effort all of this takes to appear normal. In fact, I just want to blend in. And so I spend so long pretending, or at least so long trying to be just another unremarkable person living in a small city in the west of Ireland, that I almost convince myself that that is just what I am.

But, it hasn’t gone away, you know. And it will never go away, I can see that. I have probably always known that, no matter how much I forget about it, or how much I can do, or how full my life is. It is always there, like the IRA in 1995, ready to cause chaos and mayhem and destruction, if anything goes wrong.

Inevitably, the IRA did go back to violence in 1996. They finally announced a permanent ceasefire a few years later, but the divisions and suspicion still exists in Northern Ireland, and that hasn't gone away, though most of the violence has.

I get my own ceasefires; periods of relative normality where I can operate as if I were healthy. But this condition is like a terrorist organization, one that goes dormant for a time, one that can appear like it is gone, but which is always still there, living in the cracks and weaknesses of the system. Ready to strike. Finding a way to live with this knowledge – and to achieve that massively difficult balance – is the hard thing. I don’t know if I am any closer to working out how to do it.

Posted by TheChronicSituation at 1:26 AM