My recent improvement in health and energy levels has come directly from a rebreathing mask that I got in the Breakspear clinic in . It has boosted the levels of carbon dioxide in my system, which were unusually low, and this in turn has had a positive effect on my wellbeing.

I have written multiple posts about this. Despite this, I wasn't clear on the exact mechanism of how increasing CO2 improved health and energy. A few months ago I met a guy in a setting totally unconnected to ME or health. I was to get in touch with him about another matter and he gave me his card, which had the term "Breathing expert" on it.

Naturally I asked him what this was. He explained that he has asthma, and has done some research into ways of managing the condition and helping him breathe better. He has now helped other people, teaching them how to breathe and explaining about how you breathe effects every function of the body.

There is a link here to the Buteyko Method, which was developed as a coping mechanism for asthma sufferers. It is all centred on carbon dioxide levels. The problem many people have is that we "over-breathe", in other words we are breathing too shallowly and too often. This doesn't allow us to absorb the correct amount of CO2 for proper functioning of the body.

I went to see this guy, K, a few weeks ago. He hooked up a cannula 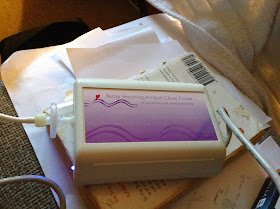 to my nose, in turn connecting this to a small box-shaped device, which he plugged into the side of his laptop. Here he was able to measure, using software he had, my CO2 levels as I breathed. It appeared on the screen as I watched.

The optimum level of CO2 is 35mmHg (I don't know what this stands for), and I was consistently reaching around 30, though when I came in first I was down at 25, a function, K said, of me being a bit stressed. This was true, I had gotten lost looking for his house and was a bit on edge.

K said that he could let me have one of the CO2 measurement devices, and a copy of the software, so that I could monitor my breathing over a number of months. There is also a training function on the software, which aims to basically teach you how to breathe correctly.

I tried this training aspect when I got home, and have done it every day for twenty minutes, as advised. It is quite simple, you watch a little ball on the screen going up then down then up again at a slow, steady pace, and you match your breathing to the movement of the little ball. You breathe in when the ball is going up, out when the ball is falling. 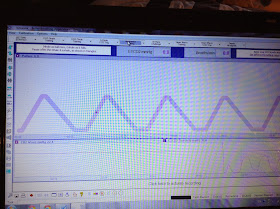 All the time your CO2 is being monitored. The ideal level is to get over 35. During the training part, when I am following the advised rate of breathing, I find I am somewhere between 29 and 32. Interestingly, you can also monitor your CO2 at normal breathing rates. Without following the rhythm on the training programme, I am generally at somewhere between 26 and 28. So it is obvious that the breathing exercise does increase carbon dioxide.

It is interesting that the breathing training programme is set so that I actually breathe six times a minute. This sounds like an incredibly small number of breaths, but it is apparently the optimum for someone at rest. A lot of us overbreathe, breathe too often, the key, apparently, is to finish each breath completely, allow all of the air out of the lungs after each slow exhale, pause on the bottom before inhaling again.

It is tough at first, though does get easier. The idea is that the muscles that we use for breathing, which according to K are "smooth muscles", have to be trained and worked out like any muscle. The breath training allows the process to become automatic, done for long enough you should see your breathing becoming slower and more relaxed, with the attendant rise in carbon dioxide.

He also explained the exact function of CO2 in the body. As we breathe in, the oxygen is absorbed through the lungs and into the bloodstream. As the haemoglobin travels around the body with its oxygen, it meets cells that need oxygen for energy. A biochemical process takes place where carbon dioxide in the cell is exchanged for oxygen in the haemoglobin. The oxygen is then used, along with other things, to make glucose, which is the basic fuel for energy in cells.

Without sufficient carbon dioxide, this process cannot take place, and so energy is not produced as efficiently. Thus, CO2 is vital in the energy producing process.

I found all of this fascinating, as it clarified the bits and pieces of information that I got from Breakspear, and it put my own experience in some context. Since I began using the rebreathing mask, my breathing has definitely changed. I no longer get out of breath as easily, something I never really thought about before, I just thought it was an inevitable part of my ME. My breathing is also more relaxed now, and noticeably slower. I'm not sure if the breath training has had any effect on it yet, but the mask certainly has.

I have been doing the breathing training for two weeks now. K advised me to do it for three months, it is a slow process, apparently. The goal is to get my CO2 level up to consistently around 35, or even higher, and this is supposed to happen through regular practice. We will see, I will keep at it anyway. It is not going to be the answer to all my problems, but may be another piece along the road to improvement.

If nothing else with ME, you do learn quite a lot about human biology!
TheChronicSituation at 1:51 AM
Share